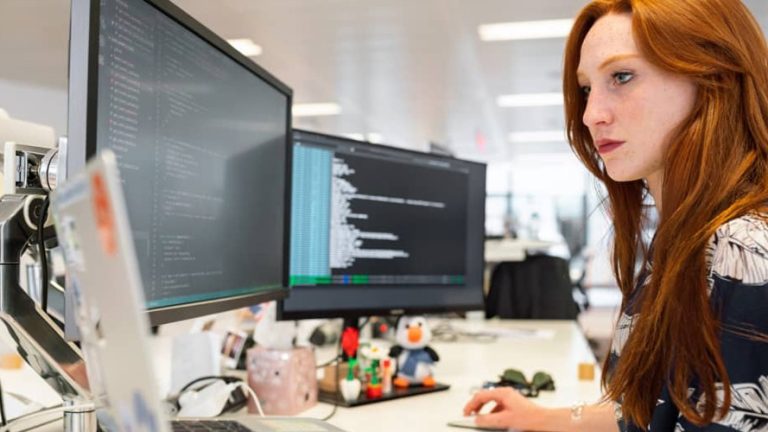 Women in technology statistics are an ever-growing part of the landscape, but inequality in pay, opportunities persists

The tech sector sadly lags behind the rest of the job market when it comes to hiring women. As the percentage of employed women across all job sectors in the US has grown to 47%, the five largest tech companies on the planet (Amazon, Apple, Facebook, Google, and Microsoft) only have a workforce of about 34.4% women. While controversial technologies or flashy CEOs get most of the negative airtime, it’s the lack of women in technology statistics that seems to be the largest problem looming overhead.

Why are many women not able to get into a managerial or technical role? One answer could be “the broken rung.” Women in technology statistics currently remain highly underrepresented in software engineering (14% of the total workforce) and computer science-related jobs (25% of the total workforce). Women software engineer hires have only increased 2% over the last 21 years.

Instead of talking about “glass ceilings,” we should acknowledge that women have a much larger barrier to being hired for technical entry-level positions. This “broken rung” in the career ladder already puts women at a disadvantage, which leads tech companies into a cycle of hiring employees of the same gender and race (mainly white males).

It, unfortunately, gets even more discouraging for women of color in the workplace. Though Asian women, black women, and Latinas report the desire to be promoted (and to be at the top of their field) more than white men or women, they’re still often promoted less. The “broken rung” is even more broken for women of color, who only make up 18% of entry-level positions, as opposed to 30% of white women and 35% of white men. We have a tough road ahead towards creating gender and racial equality in the tech workplace.

Covid-19 has challenged just about every notion of life, so how about women in technology statistics? First, it’s reported that 57% of women have felt burned out from the mandatory work-from-home caused by the pandemic. This burnout, from struggling to balance being both a working professional and a functioning parent, is leading to a mass exodus of women from the workforce.

In 2020 alone, 1.2 million parents exited the workforce with staggering three-quarters of those people being women. A large portion of those who have stayed in the workforce is reporting that being behind screens has caused a regression of gender parity that was pacing in the right direction pre-pandemic. The pandemic has challenged everyone, but it seems to have hit working mothers in tech especially hard.

Here’s a shortlist of some of the more prominent issues facing women in technology statistics:

Opportunities in tech begin with education, and there is a big disparity between the college degrees earned by men and women in science, technology, engineering, and math (STEM). At the undergraduate level, women’s participation in science and engineering depends on the specific field of study.

For example, in 2015, women received more than half of the bachelor’s degrees awarded in the biological sciences, but far less in computer sciences (18%), engineering (20%), physical sciences (39%), and mathematics (43%), according to the National Girls Collaborative Project.

Women are a clear minority in the STEM workforce, though U.S. Census data shows significant gains from 8% of STEM workers in 1970 to 30% approx.. in 2022.

Engineer and STEM advocate Caitlin Kalinowski believes more needs to be done to achieve gender equality when it comes to careers in STEM.

Letting college women and schoolgirls know that they have a future in these industries is a huge piece of this. More importantly, if girls seem hesitant to enter a STEM field, they must receive positive mentoring.

While the tech industry struggles to attract more women, retention of those who do enter the field has also been an issue. Women in STEM careers are more likely to leave within the first years compared with those who aren’t in a STEM-related job, according to a report. Reasons for leaving include a lack of role models and significant personal sacrifices they’ve had to make. About half of these women still use their technical skills at another company.

Workplace culture drives turnover and significantly affects the retention of underrepresented groups, costing the industry more than $16 billion annually, according to a survey of tech workers by The Kapor Centre and Harris Poll. A third of the women surveyed said they left their jobs to seek better opportunities, while nearly the same percentage said they left due to unfair environments.

Women in STEM fields face several challenges, according to a study. These challenges include alienation, extreme hours, bias, exclusion and isolation, and leaders not seeing them as having leadership potential.

The #MeToo movement has done a lot to raise awareness of women in technology statistics issues and harassment in the workplace, but men and women differ on its effect.

Sixty-nine percent of white male founders think #MeToo has had a positive effect, while only 34% of white female founders feel the same way, according to a study by Women Who Tech. The percentage is even lower among women of color founders (24%). In the 2020 study, 44% of female founders said they’d been harassed, and the percentage grew to 65% for LGBTQ founders.

To address gender inequality, businesses need to embed diversity and inclusion into company culture from day one. One way businesses can do this is by hiring female leaders early in their inception. Women must see other women in senior roles because it shows an organization values diversity.

Web3 Games are Focusing on Customization and Representation to Attract Female Users!

Bisexual Women are Fetishized on Dating Apps in India, like Unicorn Hunting!

What Google can teach you about good horse-back riding

6 effective ways to get more out of extreme sports